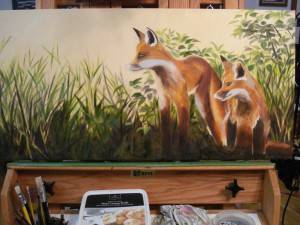 It’s been a busy few months, to put things mildly!  Not a single thing went as planned this year.  Not the weather (we were forecast to have a hot dry summer….we got cool and VERY wet)  Not the harvest….Harvest is usually done by the end of September….we just started at the END of September.  Not becoming a Grandmother….because we nearly lost our grandson! (All is well there now thank goodness!)  Who needs to go to Vegas for thrills?!  Even in the painting department.  I was very fortunate and as a surprise was juried into some heady company via The American Artists Professional league and the International Guild of Realism!  I thought I would gird the loins so to speak, and throw my efforts at their feet to see how I rated.  I certainly was not expecting to be invited to join!  But I was, so a really nice surprise.  Makes a person think they are doing something right after all.  Had some paintings get into the show in Breckenridge TX and the 82nd Grand National Exhibition in NY, as well as shows closer to home.  For all of the twists and turns that this year has thrown at us, it has been a good one so far.  Makes a person very thankful to be sure.
I’ve started a new fox painting…for some reason they always seem to get interrupted…This one by a commission.  Actually, I told my client that I would finish this painting and then do hers, but harvest timing makes me not feel right making her wait so long, so the commission is on the go now and this is on hold.  Not a totally bad thing in this case.  I’m doing this in oil and trying a couple of things with the oil that may not be in the book of  techniques.  But  I’m after an effect and the traditional mode of use won’t get it I think.  So as I think it through, I’ll work on the other one.  Henry figures I should do the fox’s noses and call it good!  I’m not sure I can, with my anal mentality, do that.  It needs to become what is in my head first.  We’ll see how it pans out.
Till next time.
Cindy