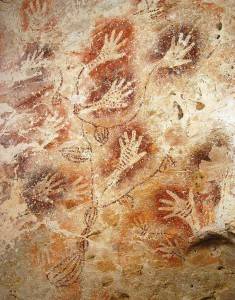 This post was inspired by a Facebook posting about new dating on Cave Paintings.  This twigged my curiosity and I started to investigate.  I read a lot and I viewed many articles on You tube.  There was a symposium on there, that I watched that covered many scientific areas on the topic.  They claimed artistic input but I saw no sign of that.
The general overview seemed to be that Neanderthals did not produce art and the “modern” humans who did…did it for a spiritual purpose that had an altered state of mind aspects.  Seemed rather blanket like for my taste.  But these communities seem to like blanket statements.  Anything that challenges this view, they tend to dismiss.
Well to be fair, there may well have been a spiritual element to some of the paintings: 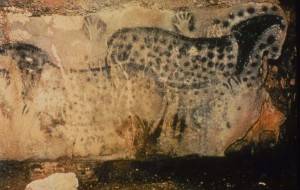 These are two in that point, with blown paint over top of hands, and dots on and past the animal outlines could be viewed in that light.
They also seemed to intimate that the style of painting was the same for the various time frames they carbon dated the various images around the various caves to.
Well I do not totally agree with that.  There may be some style per age influence that is due to lessons learned over time of doing the paintings, that were passed on, but as a blanket…. 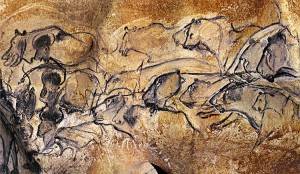 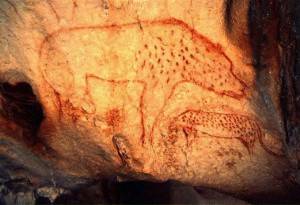 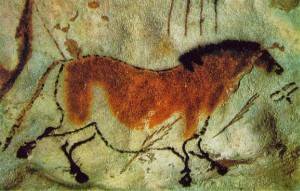 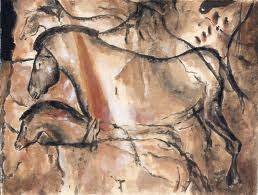 These strike me as a variety of artists, with a variety of ability and sophistication of painting knowledge.  Some of these paintings are done on a prepared ground, some used the contours of the cave wall as part of the composition.  On some of the prepared ground paintings, ghosting of other images appear “behind” the main image. (artists today have problems of covering other images on reused boards, so who is to say this prepared ground is not covering even more images?)
Many of the images also seem to depict scenes that would have been happening in life, that had no need of an altered state to compose. 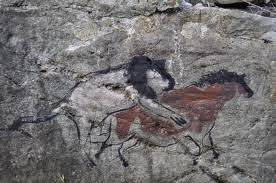 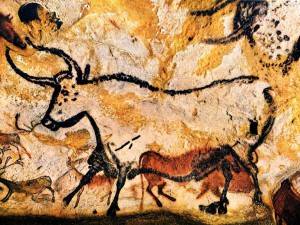 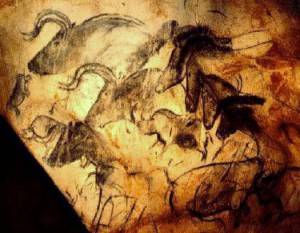 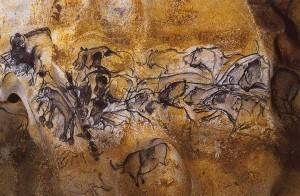 Some of these images are done on the roof of the caves, not the walls.  All are done in dark caves, but some are done in the deepest depths of the caves.  The deepest ones in the most “how did they get here” spots; tended to be the more “spiritual” ones. One study I read suggested that this could be to sight deprivation, and the brain created these images that the person wanted to put down, perhaps viewing it as a vision with some meaning.  For these, I would probably agree with their interpretation. However,
The more sophisticated images though, are not so deep it seems, and would have required quite a bit of time to make.  They also tend to cover only some species of wildlife of the time.  Not a lot of day to day stuff.  This was noted by this panel that they were animals of significance of some sort.  They did not correlate to the findings in the caves of the animals eaten as was first supposed.  The panel went further to assure their listeners that these people did not think like we did…how could they?  WELL, that was where I really took issue.  We are biologically the same but can’t think the same way?  Have the same brain but do not think the same way?  Their evidence…humans, biologically modern humans have been around for 150 to 160 thousand years.  Humans have only been producing “art” for 30 to 40 thousand of those years!  What event tripped a world wide change into producing art?  They are stumped.  Some brain change?  Some interaction?  The altered state was thought to have been the cause of this change too; there was even a discussion on what art was and how our definition of what is art has changed and how it could be applied to art back then.  I have an explanation that is dead simple and if they had spoken to artists… they may have got it.
The main thrust of my idea is that ART TAKES TIME.
Back at the beginnings of our origins, survival was an all day all consuming thing!  There would not have been time for artistic endeavors;  all doings would have been survival driven.  They would have been too tired to produce or even think in the artistic line.
There must have come a time though, as the ice age receded, when times got better for humans.  100 plus thousand years ago there was an ice age going on remember. Food and staying warm were the order of the day.  This may have inadvertently given rise to some person who may have been bored picking up a stick, that had been burnt and poking at the cave wall one day while confined to the cave for whatever reason.  This person may have noticed it left a mark there.  What do kids do with chalk or charcoal sticks…they experiment and make more marks.  Or for that matter even before that, they may have made marks in the dirt on the floor.  The point being, the impulse has always been with us.
How can I say that, what proof do I have for that?  The proof are the implements that they made for their survival! It takes a creative turn of mind to come up with the various implements to hunt, fish, make clothes etc.  People do not view this as artistic, but it is creative, and creativity is the basis of artistic endeavors.  When times are tough, creativity goes to making survival more likely.  When times are easier you have the TIME to create paints, painting implements, to even think of making a composition. To experiment, with how to even do it.  There was no big bang moment for artistic ability, it was always there.  Just with a practical bent.
The cave paintings that we have, date to around the “end” of the nasty bit of the ice age and are in regions where the climate was nicer anyway at this time.  They are also in areas that are very easy to survive in.  They are is areas where a person would have TIME.
People often tell me that they wish that they had my talent.  My response is not flip when I say that everyone has a talent.  They do.  The varieties of talent are what made our ancestors develop civilizations.  Someone who was artistically bent made better fish hooks.  Guy comes along wants one, guy #1 says I will make you one if you give me  a fish!  Trade has now started, civilization has just taken it’s first step.
Yup we artists have a lot to answer for and it is probably why over the millennium that when a people were conquered, they were among the ones killed off to keep order.  Imagine where we would be now if that had not been done; that instead of killing artistic minds they harnessed them?  Boggles the mind!!
Till next time,
Happy painting!
Cindy