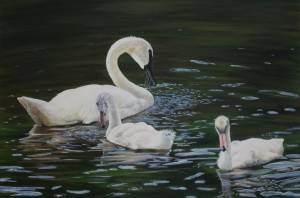 I just finished this painting and called it “The Ugly Ducklings”  I always liked that story, and the young swans definitely would not win any beauty prizes, but grow into the most beautiful of birds.
It was an interesting challenge to get the glow of light on the feathers of the Mother.  The white was bright to start with, and to get it to glow in the sun was a little tricky.  Especially as the young were also white, but their feathers muted the light and did not glow.  Interesting challenge as I said.

These are Trumpeter swans, and often fly over our area on their way north.  On the wing you know they are big, but not really.  When you see them on the water, they are big, but again you still don’t really get it.  When you see them with other birds…say geese, then you get a real idea of just how large these beauties are!  As you can see below.  Those dark birds are Canada geese! 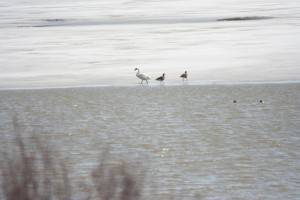 It is really early Spring here as you can see, and just a few days later the whole bunch had continued on their way North.  Going North the Swans do not seem to be in huge flocks, and travel with snow gees and Canada geese;  coming south though is a different story.  They come in larger groups, most often with the Snow Geese and have many young with them.  The young are easy to spot as they tend to still be a grey colour; as well as being just a bit smaller than the full adults.  They are also easier to get photos of if they are not with the geese.  They are a little more secure in not being shot at usually, unless a hunter can not tell the difference between a goose and a swan.  There are hunters of that stripe though.
This coming weekend I will be part of an artisan self guided trail tour, called the Wild Rose Trail.  The website is: http://www.kalynacountry.com/wildrosetrail   If you are in the area, give it a whirl.
Well, till next time.
Cindy

« You never know unless you try…
Life Moves On »