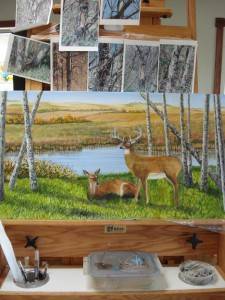 I think I mentioned before that antlers are as individual as hands. Well after consulting with friends, hunters, the Internet, and my own observations; I ended up using my hands as models for 3/4 view antlers.
Some things I learned about antlers…Whitetail antlers at least…even a trophy set of antlers have two little guys up front and a further 4 prongs further out on the wrack. These can vary in length and thickness. A young buck will have dainty thin with only 2 prongs on his wrack. A mature buck will have the full 4 that are thick and robust.
Now there are some out there who may say that “I’ve seen buck with 5 or 6 prongs besides the initial 2”, but from what I’ve found out, that generally means they have a fork on the end prong, or they are an atypical set of antlers. (And trust me atypical can get pretty out there in the prong department!)
In the end I had to use my best judgement, had a photo as a guide but ended up using my hands held in an antler manner to get the view of the antlers I wanted.
Sounds very strange I know, but hands are roughly shaped in the same manner as a wrack of antlers (and wing tips, but that is another story).
I’ve also changed the position of the bucks legs from before. The first set up sort of made me twitch. Could not figure out why until I noticed that my buck was about to trample my doe. Now he walks past her. Amazing how relaxed you can get when the twitch factor of a picture is removed!
Many of the in between steps on this picture are now posted on my website. If you are interested, take a look.
Ciao till next time.
Cindy Sorley-Keichinger

« Making a painting to spec!
A Note to self for Next Time! »